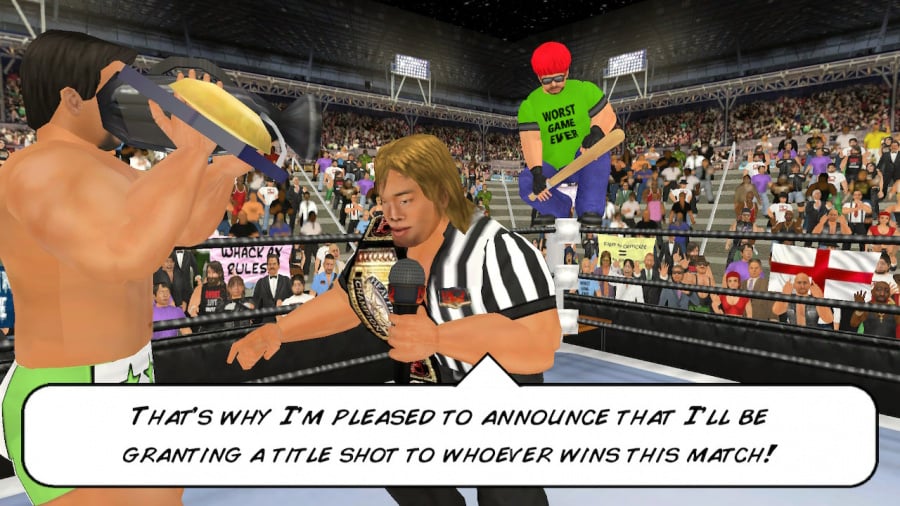 It’s been a long time since a truly brilliant wrestling game has been available on a Nintendo console. Not since the days of WWF No Mercy on the Nintendo 64 and the Day of Reckoning series on the GameCube have Nintendo fans been able to properly enjoy a genuinely brilliant rendition of pro wrestling, and frustration is beginning to set in.

The Wii got numerous WWE games, which were fine and all, but naturally didn’t quite match up to their HD counterparts on PS3 and Xbox 360. And let’s not even talk about the frankly abysmal attempt to bring the WWE 2K series to the Switch. With the recent WWE 2K Battlegrounds underwhelming too, grappling fans have been waiting decades for something truly definitive on a Nintendo system.

We’ll save you the suspense just now: Wrestling Empire definitely isn’t that. However, that’s not to say it doesn’t have a few interesting quirks that make it entertaining, if not necessarily for the right reasons. On top of that, regardless of what you think of it, the fact that the entire thing was developed by a single person has to be respected when you see what’s actually been pulled off here. 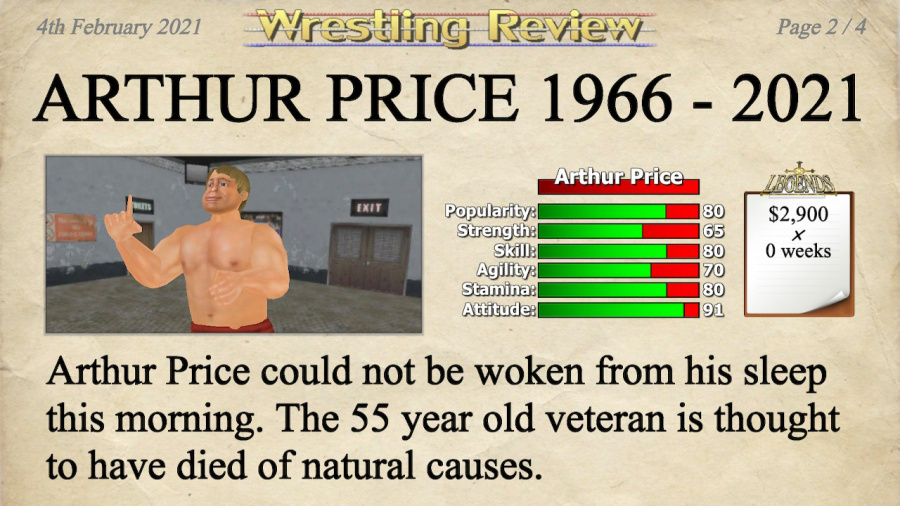 In case it wasn’t immediately obvious by looking at the screenshots, Wrestling Empire is based on the Nintendo 64 era of wrestling games, in particular, those developed by AKI: the likes of WCW/nWo Revenge, WWF WrestleMania 2000 and (of course) the aforementioned WWF No Mercy. Characters and environments are extremely chunky and low-poly, and wrestler animations are slow and deliberate.

There’s no official licence attached, so you won’t find real-life wrestlers here. Despite this, it’s still easy to identify most of the famous faces included in this game if you know your squared circle (especially if you’ve been a fan for a number of decades, like this writer has been). The game’s enormous roster of more than 350 wrestlers is divided into 10 separate promotions, and it’s clear which many of these are based on: All American Wrestling is supposed to be old-school WWF, Strong Style Wrestling is a homage to ECW, and the like.

Many of the preset wrestlers look suspiciously like real-life ones. Some are surprising: the AAW section has some fairly niche ‘90s era WWF stars like Nailz, Skinner and Luna Vachon, whereas the Hollywood one mainly consists of wrestlers who’ve been involved in the movie business at one time or another: The Rock, Roddy Piper, Batista, even Andy Kaufman. If you can recognise any of them, the in-depth editor mode means one quick name change later and they’re authentic. Naturally, you can also create your own wrestlers. 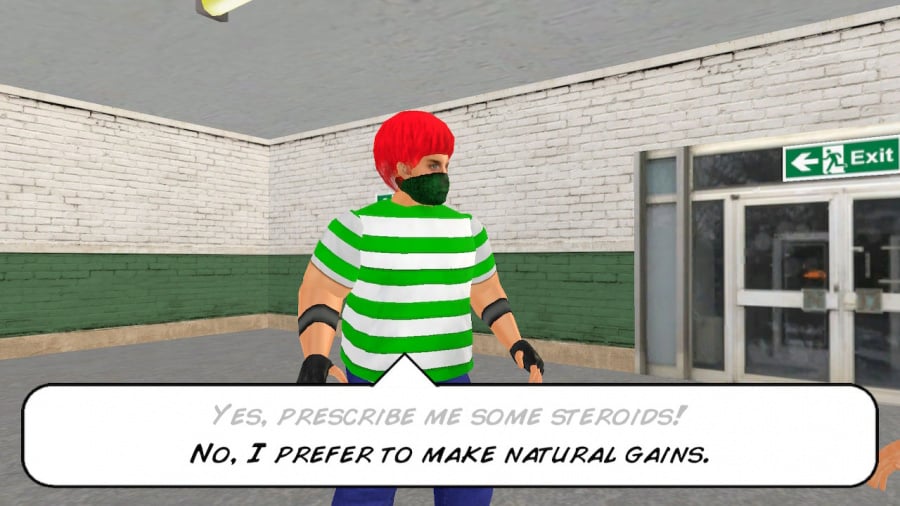 The sheer number of playable grapplers isn’t the only surprise in this game: there is an absolute wealth of game modes too. Players can choose between 26 preset match types, ranging from standard singles and tag matches to the likes of ironman, first blood, street fight, table and Royal Rumble matches. You can then go into the individual settings for each type and customise them further to your liking. Want a 20-man battle royale that takes place inside a steel cage and wrestlers can only be eliminated by submission? Um, that’s a bit of a strange stipulation, but you can do it anyway.

Accompanying the Exhibition mode (which is what encompasses all the above match types) there’s also a surprisingly engaging Career mode. Here you create a new wrestler (including the option to give them a t-shirt that says “worst game ever” on it, so it’s clear it’s in on the joke), start off having a couple of training matches in an empty arena, upgrade to having some fights in front of a handful of people and eventually try to make your way to one of the bigger promotions in order to become more famous and earn more money.

As with every other aspect of the game, there’s an enormous amount of detail in the Career mode. Wrestlers will come to you and ask you to accompany them to the ring and protect them (in exchange for cash, naturally). Dodgy characters will appear backstage and offer to sell you steroids(!) to improve your performance. A regular newspaper reports on your matches and tells you what’s going on elsewhere in the business – even wrestler deaths (another way in which Wrestling Empire keenly mimics the often tragic world of professional wrestling). You can even ask for creative control to be added to your contract so the bookers (the guys who come up with the zany storylines) can’t mess with your gimmick. 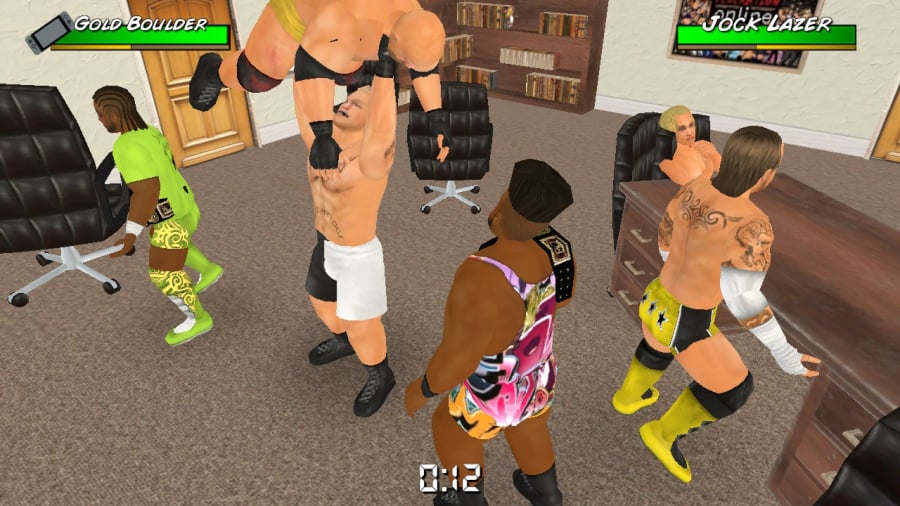 The whole thing is just overwhelmingly impressive, especially when you consider that, again, it was created by a single person. It feels like a truly definitive representation of all things wrestling. And then you actually start playing the thing, and you quickly go: “Oh. Right. Oh no.” You see, to put it in the nicest possible terms, the actual wrestling action itself is a complete mess (though not always in the worst way).

On paper, it looks like it should work well enough. There’s an attack button which can be held down for stronger moves. There’s a run button, a button for picking up objects and a grapple button. The latter is the most important when pulling off a variety of moves: similarly to many wrestling games, you can apply a grapple and then press one of three buttons along with a direction to do a different move (12 in total). It’s a reasonable number to help make things less repetitive.

There’s a similarly impressive range of different move types you can pull off, and the game does a good job of giving you different context-sensitive moves depending on the situation. If you’re standing on the ring apron, for example, your moves will be different depending on whether your opponent is in the ring, on the apron with you or on the arena floor. These contextual controls also let you pull off all manner of springboard attacks, top rope dives and the like with relative ease. 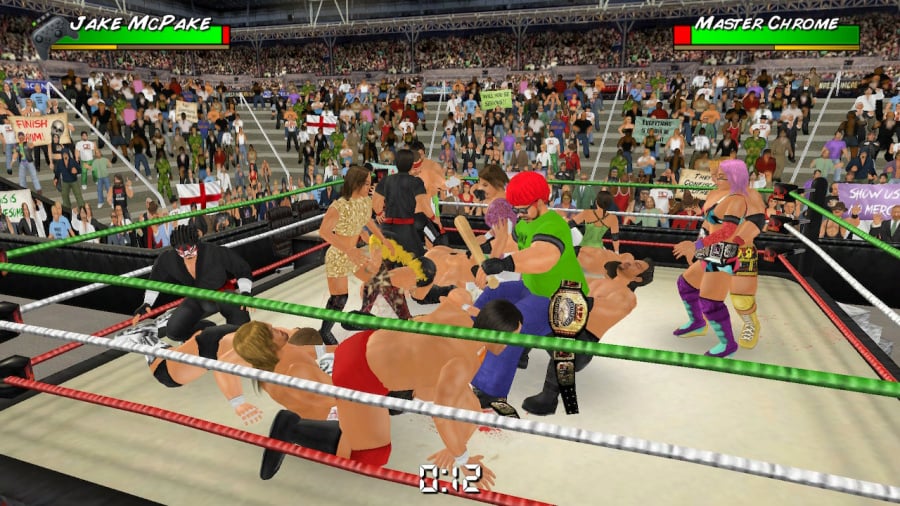 Most things can be climbed by simply walking to them, and this extends to the outside area too; if you want to hop onto the barricade then jump into the crowd and continue to fight there, then go ahead – fill your boots. Even the entrances make use of this; you have full control over your wrestler from the minute they walk through the curtain, so you have to manually walk them to the ring and enter it, but if you’d rather, you can stop to climb the barriers and taunt the crowd before doing so (or climb the turnbuckles a la Rock and Austin when you get in there).

It’s just that the whole thing is so broken, Matt Hardy would look at it and think “wow, that’s rough”. At times there are so many weird bugs and AI quirks going on that it feels less like No Mercy and more like Goat Simulator. Sometimes you’ll go to pin your enemy and they’ll get up as you do, leaving you lying on the floor in a pinning position. Other times you’ll try a grapple move near the ropes and end up falling out of the ring. Bringing weapons into the mix also greatly improves the potential for glitches.

Some of these issues are to do with the actual balancing of the game rather than unintentional errors in the code. Stomping your opponent over and over can drain their energy and boost your momentum meter far quicker than the most death-defying high-risk moves can. Meanwhile, count-outs are calculated strangely, with each player getting their own individual count: this means if you knock someone out of the ring you can wait a couple of seconds then head outside and beat them up. Because your counter will be a few seconds lower, you just need to keep them occupied outside until their count hits 10 and you’ll win. 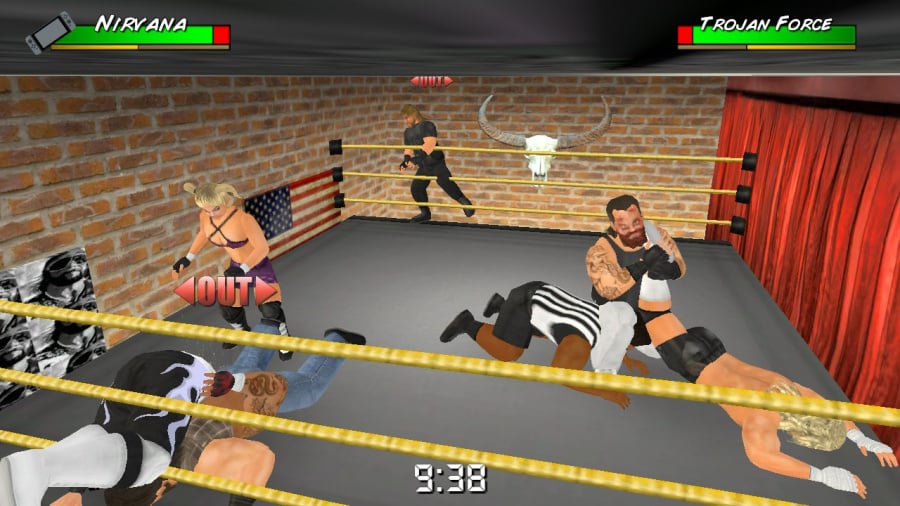 And yet, as the game regularly descends into a complete farce, there’s something about how terrible it is that’s oddly endearing. Play it with some like-minded pals and its unintentional silliness can lead to hilarity. You’ll laugh as referees occasionally pick up weapons for no apparent reason, counting pinfalls on the mat while still holding onto steel chairs. You’ll guffaw at the carnage when you decide to do a 30-man Battle Royale and quickly realise that, as clunky as it was with two wrestlers in the ring, it’s completely unplayable with 30 in there at once (although, to its credit, its frame rate and general performance remain rock-solid in these situations).

We even had tears in our eyes at one point when we decided to have a tag team steel cage match at one point and struggled to even get in the ring to start the match. These matches start with the cage already in place, you see (rather than lowering it down), and since you control your entrance you have to physically climb the cage to enter the ring. This became a problem for our AI partners, one of whom was really struggling to climb the cage without glitching and falling off it. It shouldn’t be acceptable, but damn, it was funny.

Ultimately, you have to set your expectations for this one accordingly. Is it, to quote Bret Hart, “the best there is, best there was and best there ever will be”? The answer is best summed up by Vince McMahon’s theme music: “No chance in hell.” The sheer level of choice available when it comes to the enormous roster, hugely customisable match options and impressively deep career mode shows there’s a lot of love for the business here, but the match engine is so laughably prone to botches that you have to get into an equally unhinged mindset to enjoy it.