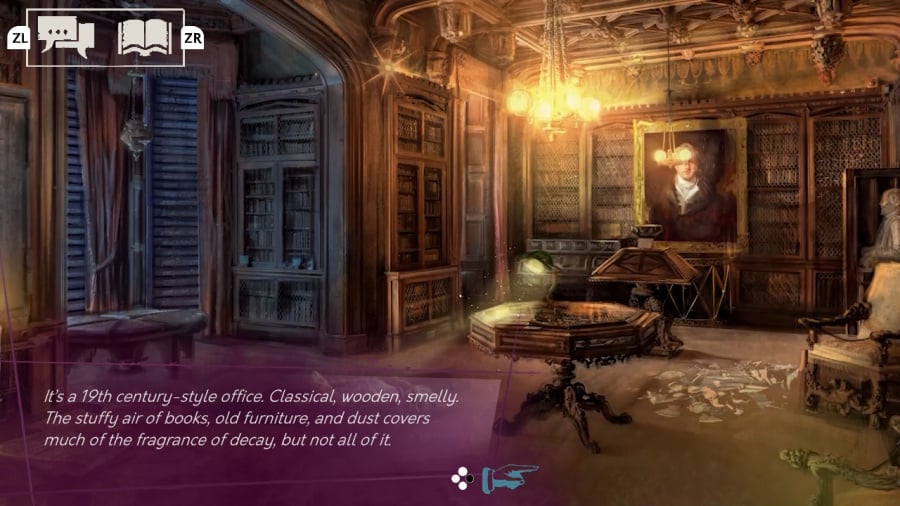 Quite unlike Phoenix Wright, though, Vampire: The Masquerade – Shadows of New York contains very little in the way of actual gameplay. Next to none, in fact. You spent all four of its hours reading and only very, very occasionally making a meaningful choice. Much of the experience is passive, and dialogue selections rarely offer much in the way of branching content. This is the novel part of visual novel writ large. If you don’t like reading, you won’t like this. If you want to solve puzzles, you won’t like this. Thankfully, if you like well-written and compelling vampire fiction, you will assuredly like this. 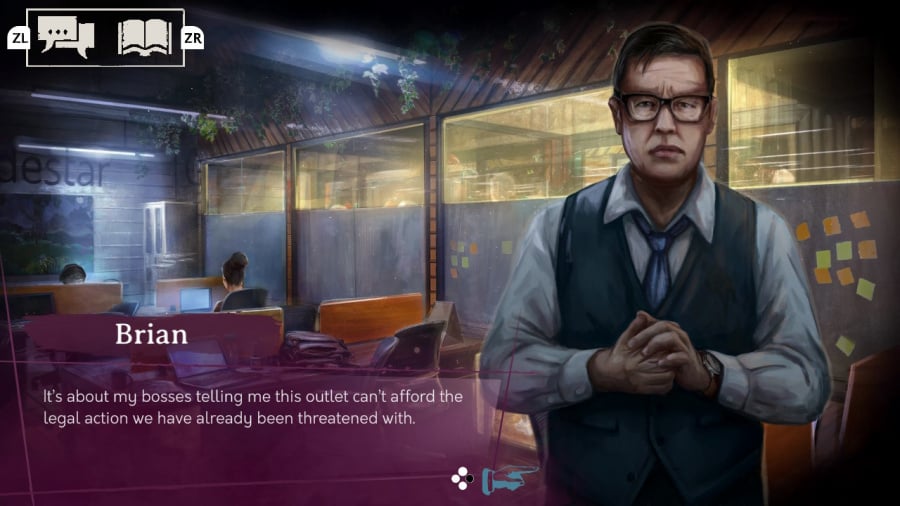 It was compelling to this writer, anyway. Immersed in the world of, erm, “Darkness”, Shadows of New York is a moody, gothic but surprisingly contemporary piece of work, and one we found engaging from start to finish. The protagonist role is taken up by Julia, an investigative journalist whose life begins to systematically fall apart – almost as though it’s part of some grand plan. It’s only a matter of time before she falls in with the Lasombra clan of vampires, a mysterious and powerful sect with metaphorical tendrils all over New York. To reveal much more would be heading into spoiler territory, and when the story is all there is, that would be doing Vampire: The Masquerade – Shadows of New York a disservice. Let’s just say Julia gets to put her investigative skills to use in a more violent scenario.

It’s visually attractive throughout, with a parade of beautifully evocative animated scenes and fantastic character portraits. Presentation is strong in general, right down to the font choices; yes, it’s just reading, but you have all the options you could realistically ask for. Text size, positioning, speed, a log to check out any dialogue you may have accidentally tapped through. There’s also a nifty glossary of Vampire: The Masquerade jargon, though despite being series neophytes ourselves, we never felt confused or lost in the world as it was presented.

It helps that the game is so grounded. Not so much in terms of its fantastical elements, but in the way it laces them through a very recognisable and thoroughly modern world, all the way down to the influence of COVID-19. There are also plenty of references to popular culture, though used in a way that makes the world feel more tangible and convincing, and the interactions more believably natural. The refreshingly unpretentious dialogue is one of the strengths of Vampire: The Masquerade – Shadows of New York, creating a nice sense of the unexpected even in the most seemingly banal interactions. Even when the story gets heavier and more portentous, Julia’s acerbic, cynical presence helps keep things down to earth. It’s a tone that the game persists with for its relatively short duration, and it’s an approach that makes it a much more accessible experience. 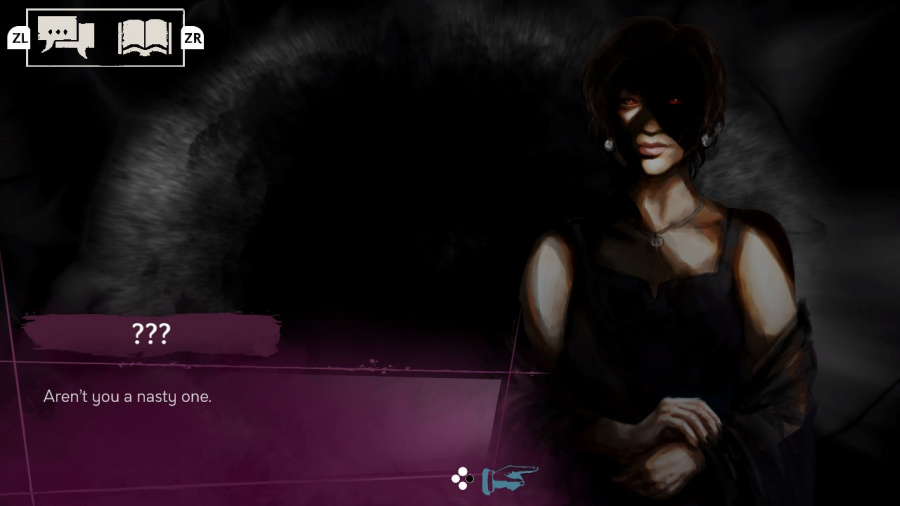 As we mentioned, there are only a few choices at critical points, and while they do branch the narrative and offer different endings, you can see them all fairly rapidly with replays and judicious use of the text skip button – it’s worth doing so to experience the most satisfactory ending. Perhaps interestingly, while this is a “standalone expansion” to a previous Vampire game (Coteries of New York), we didn’t feel lost at any point throughout – indeed, we enjoyed Shadows so much that it motivated us to check out its more full-featured predecessor. Which, we imagine, is rather the opposite of the intended order, but we think this is a pretty great way to sink your fangs into the Vampire: The Masquerade universe. Critically-acclaimed first-person RPG Bloodlines doesn’t seem to be coming anywhere near the Nintendo Switch, but our curiosity is officially piqued and we’d like to see more of this world.

It’s not perfect, of course – it’s short, the alternate endings don’t take long to skip to, and its near-total lack of interactivity will rub some players the wrong way. It feels a little like a teaser, something to dip your toe into before you head out and buy all the other Vampire games, sourcebooks and maybe start dressing like one yourself. It’s a compelling cause.

A mature visual novel that isn’t afraid to be fun, Vampire: The Masquerade – Shadows of New York is a quick plunge into the freezing waters of a bloodsucker-filled Big Apple. It won’t last you forever, but you’ll be hooked for its short runtime. It does a lot with a little and is breezy enough to fly by. Just don’t expect to actually, you know, do that much. Great art and good writing, but not enough of it.

After Resident Evil, The Witcher And Castlevania, Netflix’s Next Trick Is Creating An Assassin’s Creed Series

Random: Crash Bandicoot 4 Dev Has A Cult Classic N64 Game On The Brain

After Resident Evil, The Witcher And Castlevania, Netflix’s Next Trick Is Creating An Assassin’s Creed Series

Random: Crash Bandicoot 4 Dev Has A Cult Classic N64 Game On The Brain

welcome to the new mid-range • Eurogamer.net

Naughty Dog’s guide to The Last of Us Part II’s Photo Mode – PlayStation.Blog

After Resident Evil, The Witcher And Castlevania, Netflix’s Next Trick Is...

welcome to the new mid-range • Eurogamer.net

Naughty Dog’s guide to The Last of Us Part II’s Photo...

After Resident Evil, The Witcher And Castlevania, Netflix’s Next Trick Is...

allyenx - October 27, 2020 0
© UbisoftThere once was a time when any movie or TV show based on a video game was looked down upon by fans,...