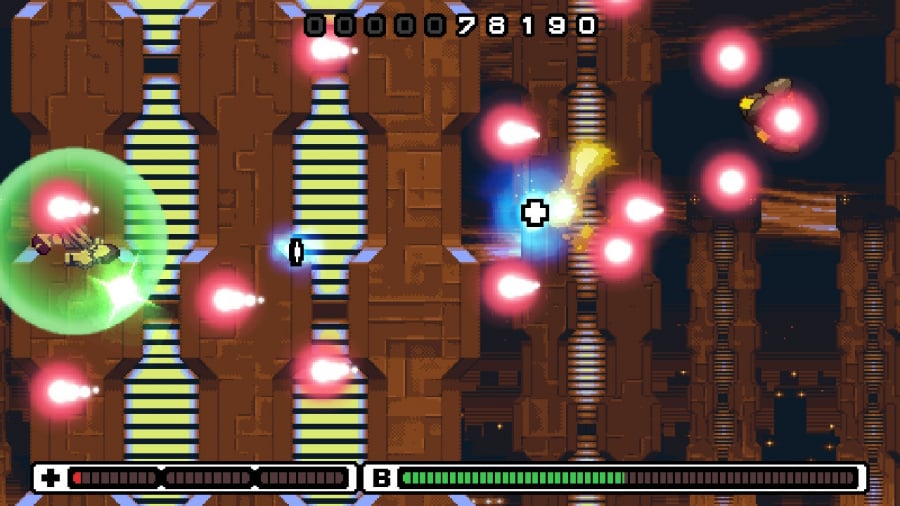 Shoot-’em-up players are well known for enjoying a good graze. After all, who doesn’t? Cows do, for example. But the important distinction between the bovine graze and the shmupper’s graze is that the former involves feeding on grass while the latter refers to moving your craft close to bullets and other danger in order to accrue extra points or possibly fill some sort of secondary bar. So, they’re not really the same thing at all, but the spirit is there. Okay, it’s not. But the risk was taken, and that’s what Risk System is all about.

Risk System is ostensibly a traditional horizontal shoot-’em-up akin to the likes of R-Type, but with stages based around patterns of enemy craft and projectiles rather than environmental hazards. Control is as simple as you’d expect – move with the D-pad or left stick, dodge roll up with the Y button and down with the B button, hitting A to use your barrier bomb.

In a strange, but ultimately rather smart move, Risk System has no fire button. Instead, your ship will autofire when aligned with enemies. This takes a moment or two to get used to but once you do, the purity of the game shines through. See, the central mechanic of Risk System is, erm, the risk system. That is, moving close to enemy bullets will cause you to “graze” them, making your barrier bar fill up. Once you fill it up by playing sufficiently riskily, you’re essentially given a smart bomb (Barrier Breaker, here) that allows you to either traditionally clear the screen or do significant damage to a boss. 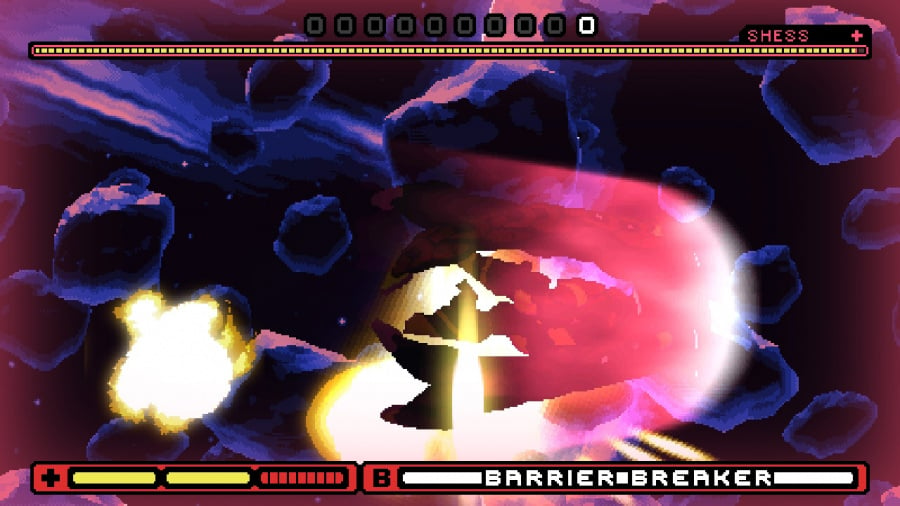 So far, so simple. The strength of Risk System is in its linearity. Of course, it’s not a particularly surprising thing that a game in this genre would be linear, but Risk System – despite having some randomised elements to its stages – is tight. There’s scope for scraping by the skin of your teeth, but you’re generally encouraged to play well enough that you’ll have a bomb in reserve when you really need it – and by “really need it”, we mean you will take a hit if you don’t have one ready to go.

Unlike many other shmups, you can take three hits here, and using your bomb to defeat grunt enemies causes them to drop tokens which can heal you. This may sound uncomfortably euro-shmup, but it doesn’t have the loose design or jank you might expect from a shooter with a health system. Stages have diverse enough setpieces, but ultimately they all boil down to figuring out where the bullets are going to be, and then going near them.

It’s difficult, but not unforgiving – if you die, you can simply restart the stage, and if you’d made it to the boss you’ll go back to the start of the battle. Accessibility is the order of the day here, with the controls fully customisable to the point that the game can easily be played with one hand. It’s laudable stuff and – before you all get cross in the comments – doesn’t compromise the stiff challenge or the game’s overall excitement. 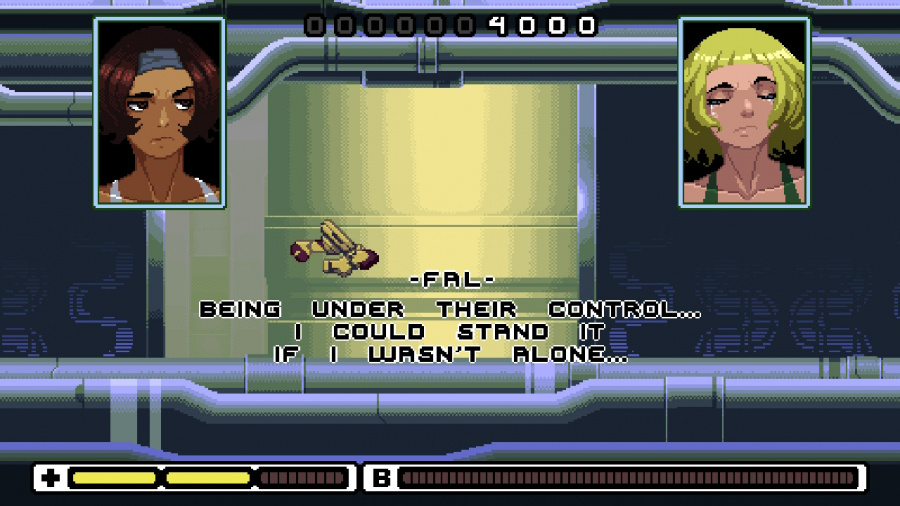 There is some memorisation and repetition involved here, but it’s only during the boss fights. The checkpointing of said battles is so generous that we found it difficult to be irritated by our myriad deaths before we’d figured out the pattern or “trick” to each boss, since the puzzle-like nature of each encounter is kind of the point. Still, though, we were a little annoyed by the boss battle that requires you to use rapidly-passing background detail as cover – the idea is fine, but executing the manoeuvre is a bit of a crapshoot given how fast things move.

Helpfully, then, Risk System is generally visually crisp and clear. There’s a fair amount of screen flash (enough to warrant an epilepsy warning at the top of the game), but these effects clearly communicate when your Barrier Breaker is fully charged – so they have a useful gameplay application. It all runs at a smooth, locked 60fps too – we’d expect nothing less from a game like this, but it’s still worth praising the slickness and fidelity of the proceedings. Bullets are clear as day on the screen and the effects are non-intrusive – put basically the visual flash never gets in the way of the shooting action, which is all you can really ask for from a shmup.

Audio is a mixed bag. On the one hand, it’s nice that the game has been fully voiced; the clips are brief, but good, adding personality to the boss battles and drip-feeding the story (which adapts to your rank/score, in a neat touch). The music, though, completely bypassed us. We spent a lot of time playing Risk System – a six-stage game – and we can barely recall at this time whether it even had music, such is the lack of impact it had on us. The sound effects are perfectly communicative of what they need to be, though, so the soundtrack isn’t a particularly big deal. You’ll be concentrating too hard to notice.

Risk System is an impressive game where it counts, and that’s in its taut, thoughtful and challenging gameplay. The polish of the design reminded us of the excellent run n’gun Bleed, with its focus on dodging and retaliating in linear stages, but of course here applied to the shmup genre. Other than higher ranks, there’s not much to rush back to in Risk System’s six short stages, but they’re sufficiently difficult enough to last genre non-veterans a good while. Absolute pro shmuppers may find it a little too breezy, but players of any skill level will be able to appreciate the exceptionally solid game on offer here. We say that there’s no risk of buyer’s remorse with this one.