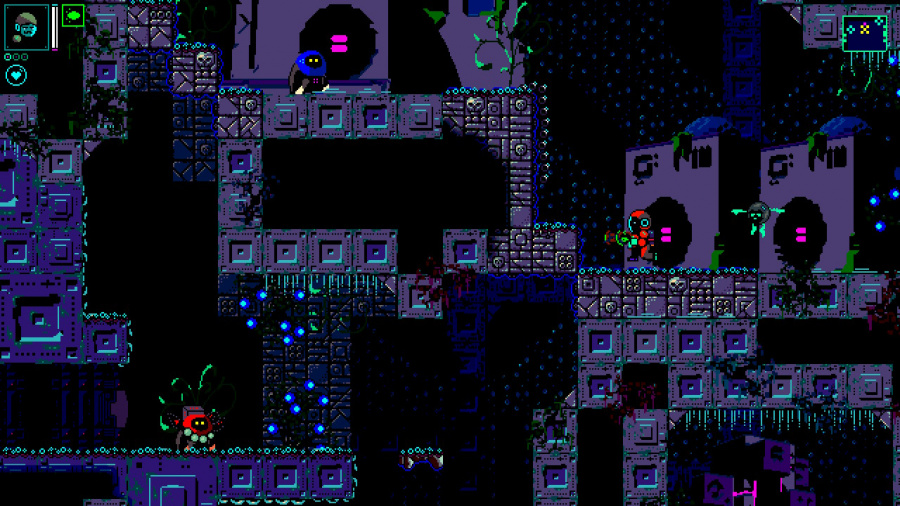 You can’t move for Metroidvania games these days, and given that a huge percentage of these are indie games with retro-style graphics, we propose a new subgenre called Retroidvania. Outbuddies DX fits rather nicely into this new pigeonhole we just created, and we can safely say that of all the Retroidvania games we’ve played, this is… well, it’s certainly one of them.

After his ship sinks, archaeologist Nikolay Bernstein wakes up to discover that he’s in Bahlam, a sunken city of the ‘Old Gods’ that happens to be located 36,000 feet underwater. On top of this, he promptly finds himself linked up to a ‘buddy unit’, a little drone thing that follows him around. And as if all that wasn’t enough, he soon discovers the Wozan, a friendly tribe of little miner dudes who ask him to help rescue 80 of their people who’re being held hostage by the evil creatures who’ve taken over Bahlam. Probably took his mind off the shipwreck, to be fair. 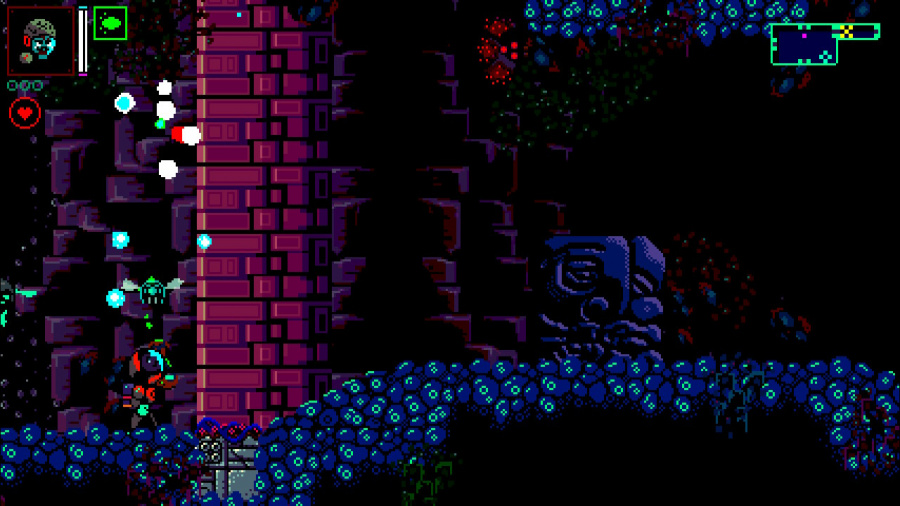 So begins a sizeable adventure in which you have to explore Bahlam and do all the usual stuff you’d expect from a game of this ilk: shoot enemies, find bits you can’t get past, go exploring somewhere else, find a new ability, backtrack to where you were before, use your new ability to get past that first bit, and keep checking the map like a maniac while you do all this. By and large, there’s nothing here that you won’t have seen in any other Metroi… sorry, Retroidvania game before, with the possible exception of the aforementioned drone chum.

You can switch to your robo pal whenever you like by flicking up on the right stick. You can then use the left stick to fly it around the level – it can pass through walls and the like – allowing you to check out any enemies, obstacles or hidden areas up ahead. If you need a more in-depth investigation you can hold the B button to make it perform a scan; this not only gives you information you should probably be able to figure out for certain objects in the level (spikes are dangerous, switches can be pressed, etc) but also reveals any weak blocks that can be blown up.

Naturally, as you progress through the game you’ll find upgrades that expand your abilities: Metroid-style bombs, rockets and the like. Just as importantly, though, you’ll also uncover new abilities for your drone too. At first, it can use its telekinetic abilities to pick up and move large blocks, for example, but later on, it’ll also be able to turn enemies into platforms, allowing you to use them to reach higher areas. It’s a fairly neat twist on the usual upgrade formula, even if the end result is much the same. 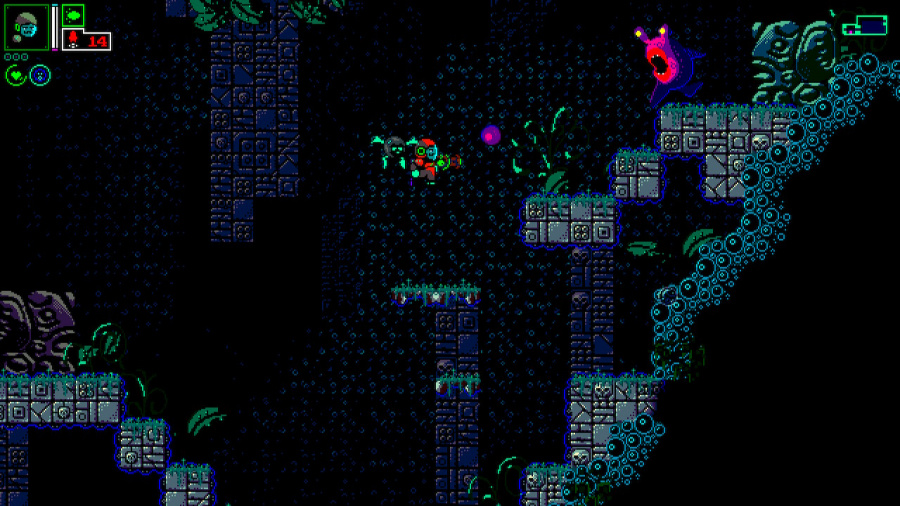 While having a drone accompanying you seems like a cool addition, it’s also partly responsible for one of the game’s biggest issues: its control system. There are so many different abilities and moves you’ll unlock in this game and they’re really not mapped to the controller in the best way. Some of the choices seem completely arbitrary; moving the right stick up switches control to the robot, for example, whereas moving it down toggles between your weapons.

Meanwhile, there’s a special low duck move that’s useful for avoiding projectiles, which is performed by pressing Down and R. The problem is, the R button is also used for a quick evade move, which means if you press R before you press Down, you’ll dash instead. Needless to say, if you’re standing on a narrow platform when this happens you may end up turning the air bluer than Sonic’s bum. There’s no option to redefine these controls, and there isn’t even a controls screen in the Pause menu or anything, so should you decide you need a refresher on the convoluted list of commands at any point, you’re out of luck. 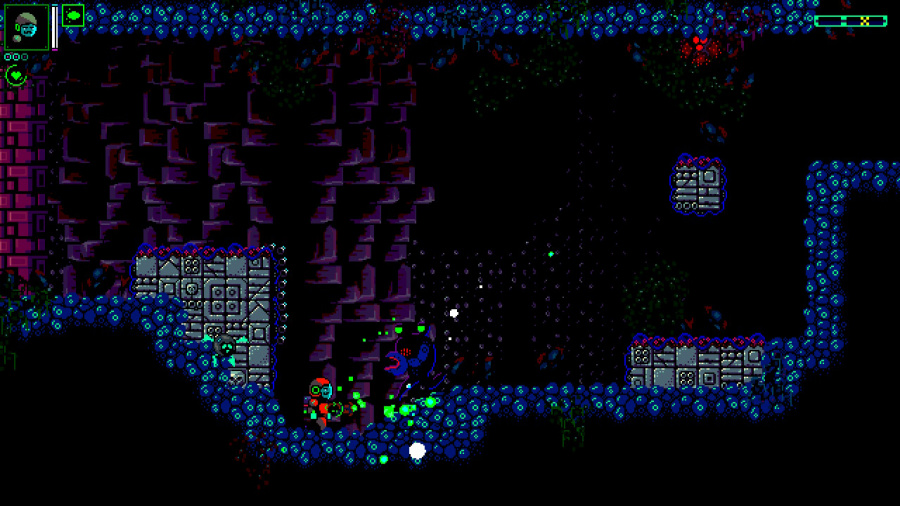 The controls aren’t the only notable problem here, unfortunately; the map is a bit of a mess as well. This is a large game – you’re looking at around 10-15 hours to beat it in your first playthrough – and it’s crucial that large games have maps that are simple to understand and make it easy to track your progress. Outbuddies DX’s map does neither. Sometimes a room has a gap in the wall, which makes you think there’s a part that’s yet to be explored; when you get there, it’s just a wall. Other times two rooms will be next to each other on a map with no visible connection, yet when you go there you discover you can move from one to the other anyway, because it doesn’t seem to count certain tunnels.

The labelling is hugely confusing too. Some of the rooms have little circle icons, which the map’s legend informs us means ‘Item’. We started losing our mind a little because every time we visited one of these rooms, we couldn’t find an item anywhere. After a number of hours, it finally clicked: it’s showing you rooms where you’ve previously collected an item. What sort of map tells you what you already have, but gives you no indication of what you’ve yet to find? The same goes for more notable upgrades; even after you pick them up their icon remains on the map, meaning hours down the line you can’t remember if they’re new ones or ones you already have. 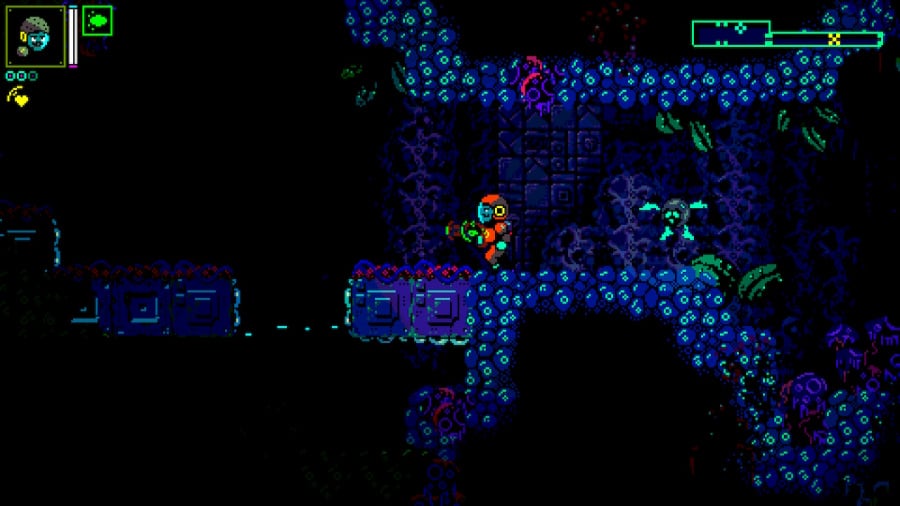 The other frustrating issue is the general lack of fast travel points. There are a handful or warps dotted around to move you between large areas, but the number of rooms is so vast – and the map makes it so awkward to plot a route through them – that it can take you an absolute age to get anywhere at times. Add to that the fact that many rooms look so similar and it’s very easy to lose track of where you are in Outbuddies DX, and where you were going, and the game makes no effort to give you any hints or nudges as to what you should be looking for next.

Don’t get us wrong, Outbuddies DX has its moments. Combat is satisfying at times, the music is tremendous and boss battles can be suitably epic. It’s just that every time we find something that makes us smile, we find something else that doesn’t; the lack of major plot development, the way some enemies can be turned into platforms but other identical ones can’t because reasons, or the way it drops a random F-bomb right at the start of the game presumably just to seem cool.

Outbuddies DX tries to mix things up a bit with unique features like a playable drone partner. The problem is, it tries to be a little too clever for its own good, and its failure to effectively pull off solid fundamentals like the controls and the map system means that the gimmicks suffer as a result. There’s a lot we want to love about this game, but its constant annoyances make that hard.

Here Are The Top Ten ﻿Best-Selling Nintendo Switch Games As Of...

allyenx - August 6, 2020 0
If you've been following events in the world of Xbox over at our sister site Pure Xbox, you'll no doubt be aware that...