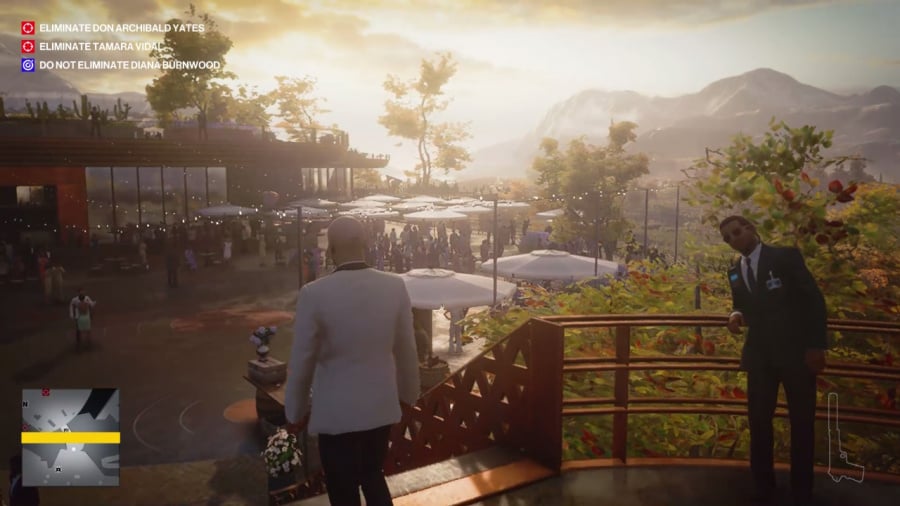 Well, it’s finally time. IO Interactive’s superlative World of Assassinations trilogy draws to a triumphant close with Hitman 3, one final blast of slick and sophisticated missions for the unstoppable Agent 47 to shoot, strangle and poison his way through as he continues to close the net on the elusive Partners of Providence. It’s a worthy finale to an amazing franchise reboot and, through the magic of ‘the cloud’, Switch players are invited to join the ride in a version that – assuming you’ve got the necessary bandwidth – gets the job done surprisingly well.

The second “Cloud Version” Switch release for western audiences after Remedy’s Control back in November of last year, Hitman 3 definitely feels like a slightly better fit for the inherent technical shortcomings that we all know are part and parcel of streaming games in 2021. No matter how good your home network setup is, you will likely suffer some input lag from time to time, while occasional framerate spikes do occur and the quality of the stream’s visuals can and will dip, resulting in some artefacts and image blur. However, with a mostly slow-moving experience like Hitman, these occasional rough edges don’t cause quite as many problems as they could do. If you’re an absolute stickler for a crystal-clear, smooth as silk gaming experience you’ll likely find plenty to pick holes in here but, if you can accept the nature of the beast, we reckon you’ll be pretty pleased overall. 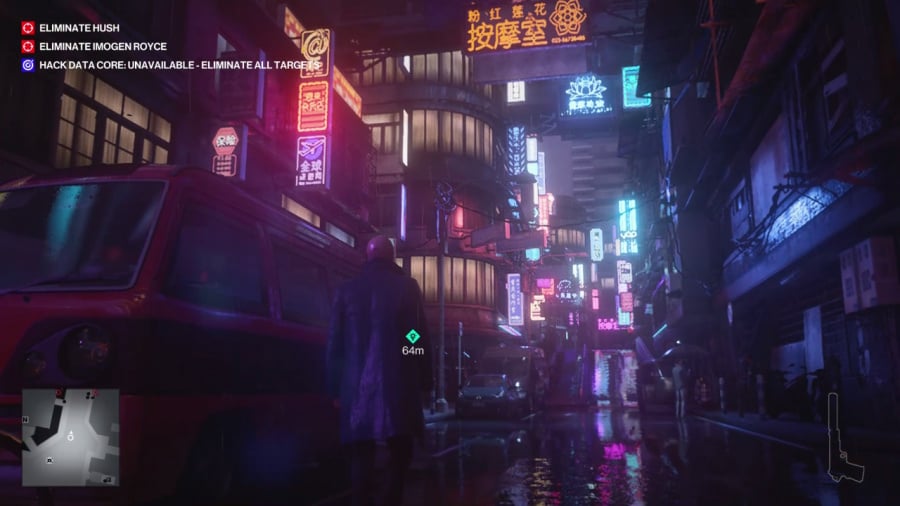 Jumping into Hitman 3 for the first time on Switch, you’ll be instructed to play a short demo set in the ICA training facility in order to ascertain whether or not your internet is capable of running the game at an acceptable level. Play the demo for a couple of minutes and you’ll unlock the option to purchase the full experience and jump right into the action with no further downloads or hold-ups. The client itself is free to download, and less than 50MB in size, so, if you’re tempted, it’s really a no-brainer to at least give this a whirl and see how your home network holds up.

Our initial experiences with the full version of Hitman 3 – once we’d cleared that demo and attempted to boot into the game proper – weren’t particularly positive, we have to say; several tries were required before we finally managed to successfully connect to the servers that host the game. This was, however, also a widespread issue for Control around its cloud version launch day, and reports indicate that additional servers were added to solve the problem within twenty-four hours in that case, so we’re fully expecting this to be resolved pretty sharpish. Teething problems aside, once we connected and launched into the game’s spectacular Dubai opening level, we were impressed with the experience it delivered. 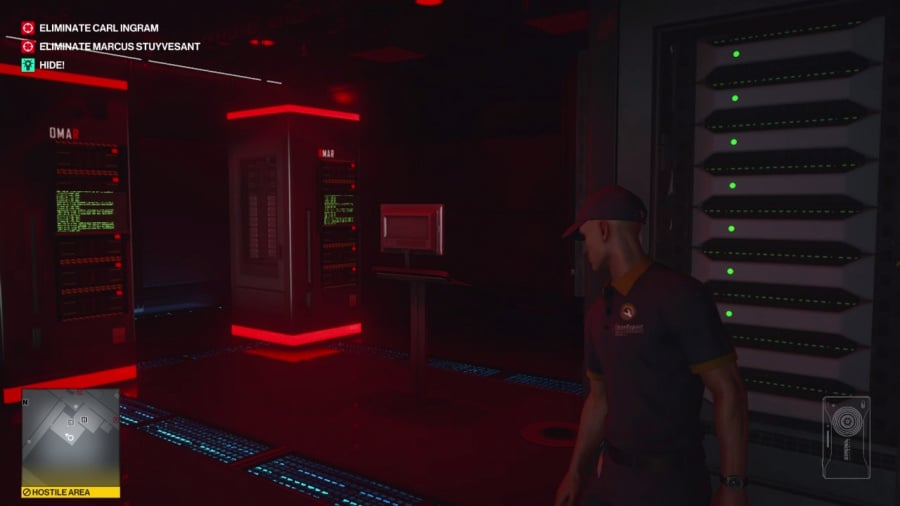 Unlike the Switch’s Control Cloud Version, there are no decisions to be made here with regards to graphical modes on the part of the player and, where that game offered enhanced and quality options to help smooth the streaming experience, Hitman 3 goes with an automatic solution that notifies you as it adjusts the game’s quality on the fly in order to keep things running as smoothly as possible, dropping down to low-performance mode and then back up as is required. We certainly still experienced stuttering here and there – sometimes things slowed down to a complete crawl momentarily – but these moments were surprisingly few and far between across the campaign. Another issue we were concerned with – how dark levels would translate given the inconsistent clarity of image whilst streaming – proved to be pretty unfounded, with even the darkest of areas remaining perfectly playable.

Hitman 3 really is a quite stunning title on a graphical level; the gorgeous level design and atmosphere of Agent 47’s final foray are translated impressively well on Switch, for the most part. We managed to sneak our way around the Burj Al-Ghazila, taking out our targets – as well as a few unfortunate bystanders – with little in the way of serious technical issues. Yes, if you decide to repeatedly spin the camera around as fast as you can for no good reason you’ll most likely notice a bit of stuttering – and the image quality is prone to waver between almost perfect clarity and a bit of a blur at times – but on the whole, we found it pretty easy to forget about the fact we were streaming and just sit back and enjoy the game. 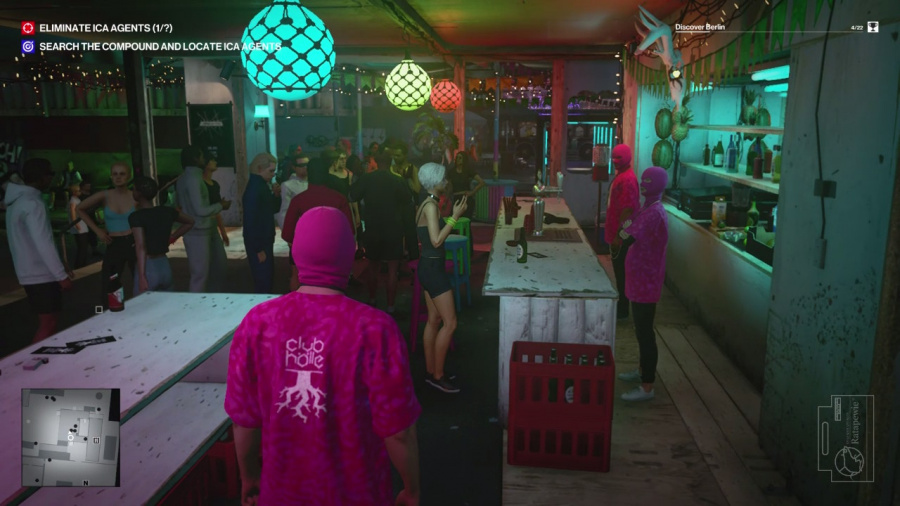 And what a game this is. We’ve already played through the entire experience in all of its 4K/60fps glory on Series X (you can find our thoughts on that in our full Hitman 3 review over at sister site Pure Xbox) and, assuming that Switch is your only viable option to experience Agent 47’s last hurrah – and your internet is up to the task – this cloud version delivers a solid alternative that we’ve enjoyed almost as much as its native console incarnation.

From that stunning opener in Dubai through a wonderfully in-depth English Manor murder mystery, a tense ten spy stand-off at an illegal Berlin rave and a rain-soaked sojourn through the streets of Chongqing, China, Hitman 3 delivers a succession of sorties that sees IO Interactive at the very top of its game. Yes, the final mission is a bit of an on-rails dud that focuses too much on wrapping up the narrative instead of giving us one more sandbox to play around in, but there’s so much standout stuff on offer before that point arrives that it’s hard to complain too much.

This is a slick and intricate stealth title, a worthy finale to a monumental trilogy and an experience that we have thoroughly enjoyed seeing through all over again in this Switch version. In fact, we’re actually toying with picking up the game’s season pass on Nintendo’s console, such is the level of enjoyment we’ve derived from sinking into our bed at night, headphones on, to slowly and methodically pick our way through some of the wonderfully intricate levels IO Interactive has served up here. 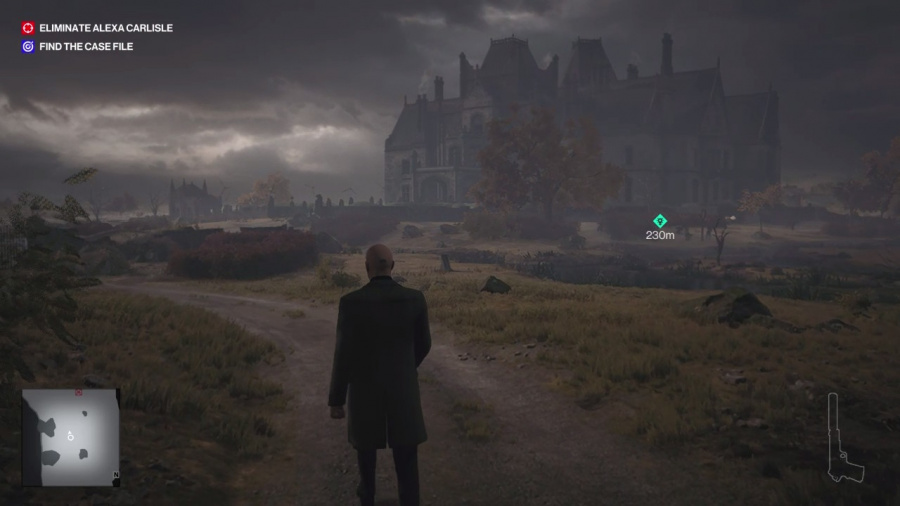 Overall, besides the expected streaming issues that we’ve detailed above, and those launch day connection issues that we hope to see fixed pretty sharpish, the only other real problems that we could point out with Hitman 3 – Cloud Version are some borderline long loading times here and there and the fact that the Switch’s Joy-Con controllers can make aiming, and especially taking tricky headshots, feel a little on the finicky side. A Pro Controller all but remedies the issue – gyroscopic support would be a dream solution – but beyond this and even coming straight off the back of the immaculate Series X experience, this is a version of the game that we enjoyed our time with and one that delivers the goods – so long as you’ve got the internet to deal with it and don’t mind dishing out the cash for a game that, let’s face it, will only ever exist on a server somewhere and is prone to any and all of the problems and caveats that situation entails.

Hitman 3 is a fantastic conclusion to one of gaming’s truly great trilogies and, with this Cloud Version, Switch players get to join in the fun in an experience that delivers the goods – so long as you’ve got the bandwidth to handle it. The expected, unavoidable technical shortcomings of streaming a game over the internet – input lag, visual dips and framerate issues – are all present and correct to some degree but, on the whole, if your broadband setup is up to the task, you’ll find that a perfectly playable version of a slick and addictive stealth title awaits.