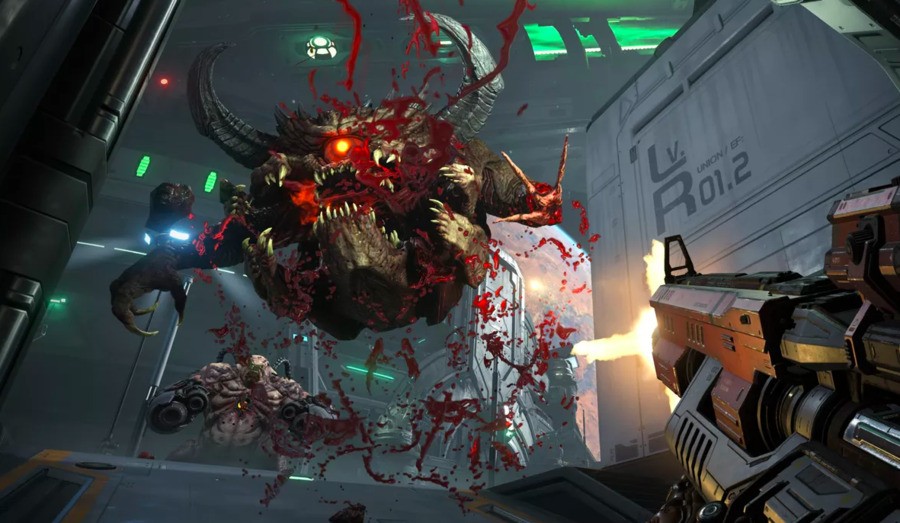 Bethesda has announced that DOOM Eternal is coming to the Nintendo Switch, with Panic Button – the studio that ported DOOM and Wolfenstein II – handling conversion duties.

The news came at this year’s QuakeCon, with the publisher confirming a Nintendo version alongside the PS4, Xbox One and PC editions of the game.

There’s no release date as yet, but Bethesda did confirm that players will be able to take control of demons and enter another player’s campaign – a bit like Dark Souls, then. There will also be new weapons, such as a massive flamethrower and deadly blade. You’ll also get a new dash skill to help navigate the underworld.

No footage of the Switch version has been shown as yet, but some gameplay snippets (presumably PC) have been shown:

The DOOM Slayer is back and he’s got several armor and weapon upgrades to use in #DOOM Eternal, including a new dash movement, extendable blade, and a new Super Shotgun Meat Hook mod. https://t.co/4WubJuZeGO pic.twitter.com/GLBBbgyvas— DOOM (@DOOM) August 10, 2018

Demons in #DOOM Eternal are destructible. You’ll blast off chunks of armor and flesh from your enemies as you unleash your arsenal. https://t.co/4WubJuZeGO pic.twitter.com/Tev99b9ywD— DOOM (@DOOM) August 10, 2018

Let us know if you’re excited by this announcement by posting a comment.

Could Alvo be VR’s answer to Call of Duty? • Eurogamer.net

Could Alvo be VR’s answer to Call of Duty? • Eurogamer.net

Takaya Imamura Describes Star Fox 64 As “The Game Of My...

allyenx - April 16, 2021 0
It’s not exactly the best time for fans of futuristic racing. With no new F-Zero on the horizon and the WipEout series seemingly...