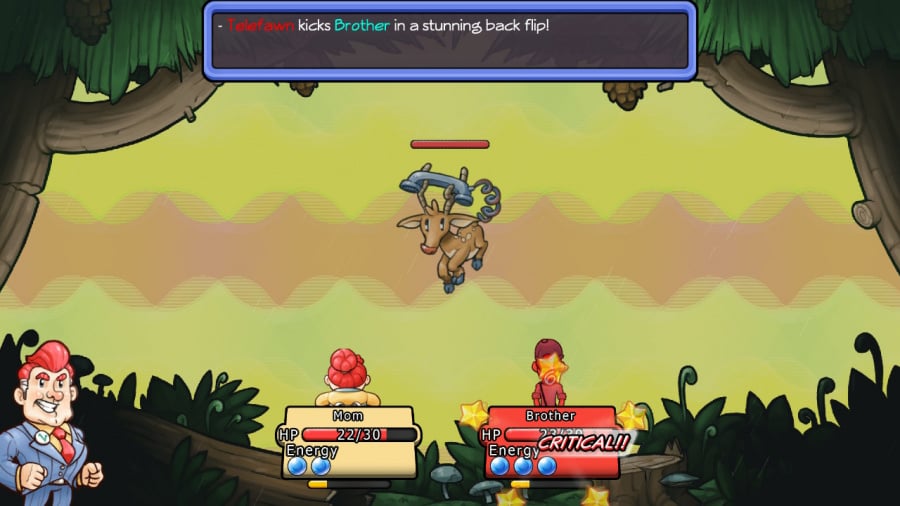 Comedy in video games is an extremely difficult prospect. As everyone well knows, the truest comedy in the medium comes from the stupid jokes and antics of you playing with your friends; scripted yuks are generally hamstrung by the inherent repetition and player-controlled pacing of any given game. Naturally, there are exceptions that use the form itself to make their jokes, which resonate with a community that’s very used to the foibles of their hobby. Undertale springs to mind as an example of a genuinely hilarious game, while the likes of The Bard’s Tale: Remastered and Resnarkled is the kind of thing that’s content to go “look at how stupid and crap RPGs are! Anyway, here’s a stupid, crap RPG.”

We’re grateful that Citizens Unite!: Earth x Space manages to avoid being cringeworthy, instead presenting an entertaining duology that prioritises player engagement over comedy. Essentially, you’ve got a couple of fairly similar RPGs here – in Earth you’re the Vice President, and in Space you’re Ambassador of Earth, but your goals are generally the same in both titles – recruit people to your squad and order them around without throwing a single punch yourself. Manipulate the public like a real politician! 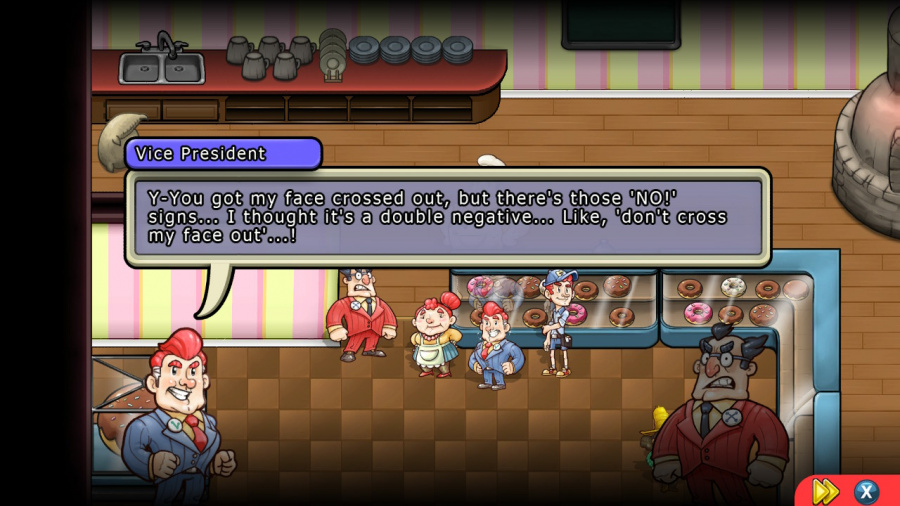 The original Citizens of Earth – originally released on 3DS and Wii U – takes inspiration from the legendary Earthbound/Mother series, though not so much in terms of its tone and atmosphere, more in presentation and the execution of its combat. As the aforementioned VP, you’ll spend most of your time walking the world and completing missions assigned by your, erm, constituents, which on delivery will allow you to recruit them onto your side and use their unique skills in battle. The turn-based battles reminded us of the systems employed by several Zeboyd RPGs (specifically their Penny Arcade titles) where each turn you’ll gain an extra “point” that can be spent on more powerful attacks if you can hold out against your opponents.

It’s a fun system that leads to a fair amount of variety, but we found the pugilism was rather on the easy side, negating much of the tactical use you might get out of the different characters. It’s quite easy to grind levels simply by mashing the A button through combat, and we wondered if an auto-battle system ala the PSP’s Final Fantasy IV: The Complete Collection re-release may have benefited the proceedings. Still, it’s breezy enough not to be frustrating – there is an alternative way to level up characters ala Pokémon’s daycare – and the spirited dialogue and superbly silly storyline will see you through. 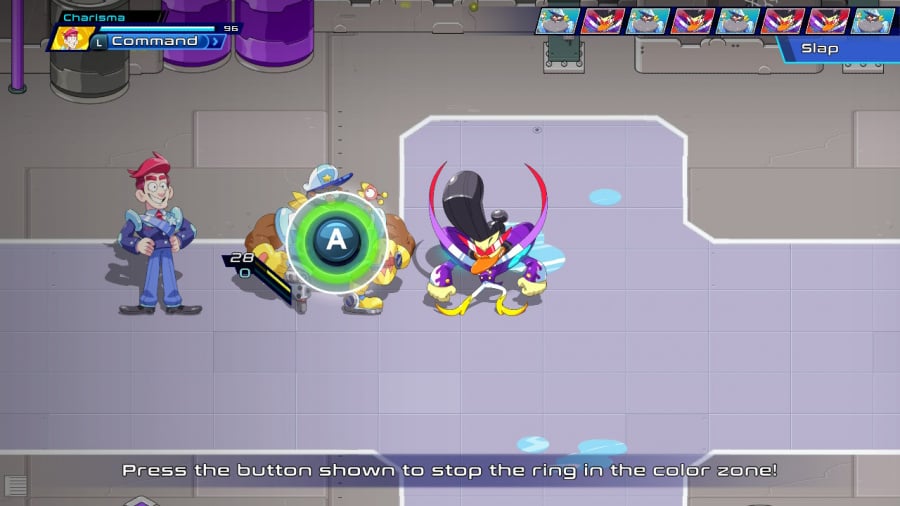 Its sequel, Citizens of Space, is a pretty big overhaul. Moving the action from earth to – you guessed it – space, you take control of Earth’s fairly incompetent Ambassador who suffers something of an acute embarrassment when “Erf” itself seems to have completely vanished in the middle of his speech to the Galactic Federation. This amounts to a mission featuring similar recruiting gameplay to the original Citizens of Earth, but the battle system has been entirely overhauled to more closely resemble the likes of Paper Mario (or delightful imitation Bug Fables) with timing-based attack buffs and QTE defence. As a consequence, the grindier aspects of Earth feel altogether less arduous; this type of combat feels like it fits the game much more than the somewhat busy Earthbound style found in the first game. The fighting here is something to be enjoyed rather than a necessary obstacle between you and the next part of the story.

It isn’t perfect, of course. While Citizens of Earth runs flawlessly (as well it should!), Citizens of Space suffers a little from performance issues in handheld mode. It’s a bit of a shame, because the artwork here is very impressive and enjoyable, but on the Switch, it looks a little crushed down, with visual glitches like characters flickering and a framerate that, while ostensibly smooth, doesn’t quite feel right – frame pacing seems to be a consistent issue in larger areas, to the point that looking at the game for a prolonged period actively made our eyes start to rebel. It’s exacerbated by the fact that the maps are pretty big and somewhat confusing, so you’ll be spending a lot of time in them. Your mileage may vary on that issue, but for us, it’s a bit of a problem when both Earth and Space are presented as a package like this – they’re not on an even keel technically, which distorts the illusion of coherence. 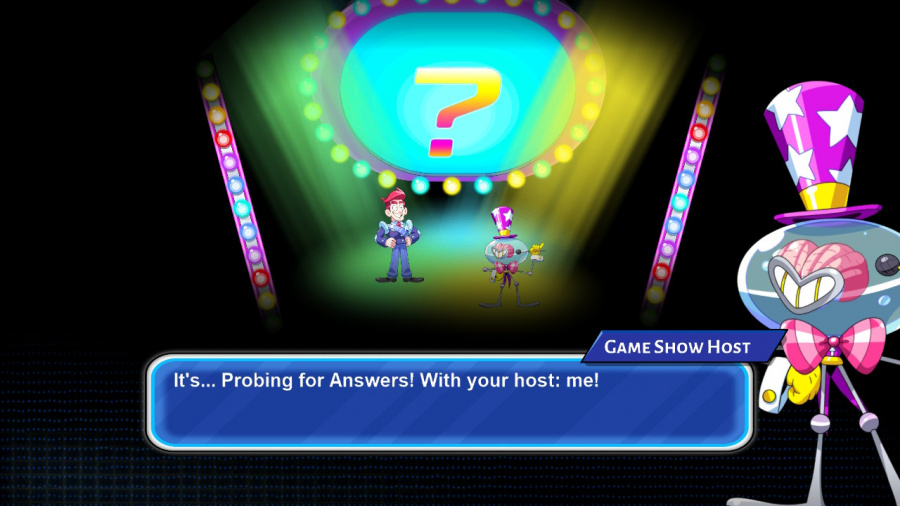 Speaking of which, the games have been updated to reflect their packaged status. And they’re very much joined at the hip, with a simple press of the minus button letting you save your progress and jump over to the opposite “era”. We won’t spoil the new additions to the story, but while there’s more narrative thread between the two games than there was in their separate releases they’re still very distinct experiences.

It’s cool to be able to switch games so effortlessly and there’s satisfaction in clearing both on a single save file, but you’re still best served sticking with one until it’s beaten before moving onto the other. These aren’t short games, either – it’ll take you the best part of 30 hours to clear them both, and that’s without completing all the side missions or digging up every last bit of content. There’s plenty here if you get hooked, and that’s not particularly difficult to do considering how fun the characters and writing are.

While it’s a compelling package, Citizens Unite!: Earth x Space doesn’t excel as an RPG in either of its halves. There’s fun to be had, but it’s obfuscated to some extent by technical issues and a lack of balance to its gameplay. That said, a lot of love has obviously been poured into this title and if you like your games with a bit of a unique personality, that’s very much in evidence here. If you’ve already played these RPGs before, there’s not enough here to draw you back for a repeat play, but new players might find this worthy of their hard-earned cash – if they’re willing to put up with some rough edges.

Soapbox: After 17 Years, Monster Hunter Rise Finally Made Me Kind Of Competent

allyenx - April 12, 2021 0
A work-in-progress look at the upcoming amiibo handbook (Image: Ninty Media)If you're looking for a physical accompaniment to our ever-growing amiibo database, look...